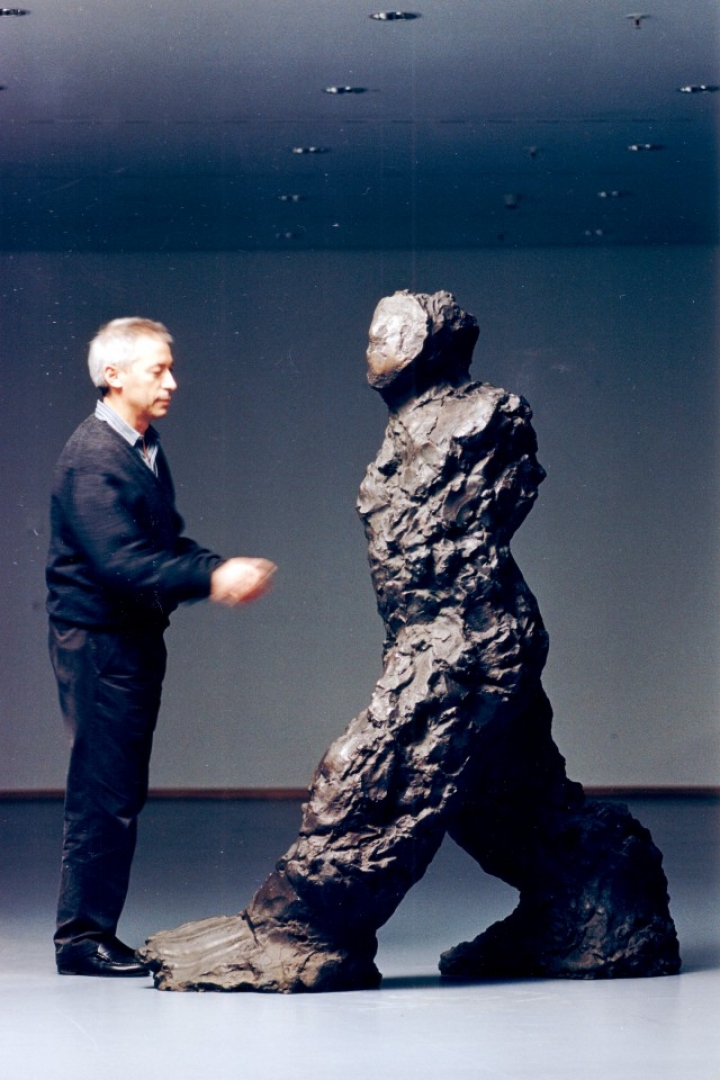 Karol Broniatowski gained international fame thanks to his sculptures of people made from newsprint paper. He has lived and worked in Berlin for 40 years. On 9th June at 5:30 PM in the multimedia room of the Emigration Museum Dorota Grubba-Thiede PhD from the Gdańsk Academy of Fine Arts will talk about various means of artistic expression - from sculpture to performance - which can be found in his art.

Karol Broniatowski is a Polish sculptor who has lived and worked in Berlin for 40 years. He started his studies at the Warsaw Academy of Fine Arts from painting. Later, he continued them in the studio of an eminent sculptor and teacher, Professor Jerzy Jarnuszkiewicz. He gained international renown thanks to Homo Gazeticus, unique life-size sculptures of humans, which were made of newsprint paper, instead of stone or bronze. He created 3 groups of 50 figures each in years 1969-74. In 1972, two years after his graduation, he represented Poland at the 36th Venice Beinnale. Later, his works were presented at the São Paulo Art Biennial in Brazil, the National Museum of Modern Art in Paris, the German Mannheimer Kunstverein and galleries in New York, Antwerp, Brussels and other cities around the world.

In 1976, he received the DAAD scholarship, which allowed him to go to Berlin, where he has been working until today. Human figures made from various materials and shown in different arrangements or settings are the central theme of Broniatowski's art. The artist emphasises two factors, which are crucial for his work: the material and the moment. He sees the material as a conversation partner - "the material affects the form and the content, which is present from the very beginning, but it is not unchangeable. The final pieces are an effect of my cooperation with the material". He also notices the significance of the moment, in which a given piece is produced - "I make small bronze figures, whose poses are identical. They have the same leg going slightly to the front, but they are different, because they were made at different moments." Broniatowski is also an author of many monuments and sculptures in the public space. The one devoted to the deported Jews of Berlin at the Grunewald Station, which was made in 1991, is the most famous one. It is a long concrete wall with human figure shaped empty spaces.

The work of the sculptor, which involves various media - sculpture, multiplication, film, photography or performance as well as pure ideas - will be presented by Dorota Grubba-Thiede PhD, an art historian and a lecturer at the Gdańsk Academy of Fine Arts as well as a curator of many contemporary Polish sculpture exhibitions. She is also a member of the Polish Institute of World Art Studies, which gathers art historians, art restorers, ethnologists, cultural experts, theatre and film specialists, people interested in visual culture and the representatives of similar fields, which focus on studying art or protecting art as well as the world cultural heritage.

BEYOND ART is a monthly cycle of lectures, which present the most interesting Polish emigrant artists of the 20th and 21st century. These artists create different forms of art: painting, film, sculpture or architecture. Their lives and work were divided between Poland and the rest of the world. They were refugees, expatriates or citizens of the world. Eminent experts from all over Poland, especially linked to the artists, like art historians, curators of their exhibitions or authors of monographs present their achievements, which escape simple patterns and go beyond the limitations of human thought or artistic matter. The experts also talk about the biographies of the artists, which are spread between countries and continents. The lectures are aimed at a general public. They have an open, non-academic form and a popularising character. Huber Bilewicz PhD is the author of the concept and programme of the Beyond Art cycle.

A Polish sculptor who works and lives in Berlin. Born on 23 April 1945 in ‎Łódź. In 1964, he began his painting studies at the Academy of Fine Arts in Warsaw. He completed his education on 1970, in Professor Jerzy Jarnuszkiewicz's studio. In years 1969-74, he created three groups of around 50 newsprint paper human figure sculptures. In 1972, he represented Poland at the 36th Venice Biennale with these sculptures. Later, they were presented at the São Paulo Art Biennial in Brasil, Philadelphia Bourse in the USA, Musee d'Art Moderne de la Ville de Paris, Mannheimer Kunstverein in Germany as well as galleries in New York, Antwerp, Brussels and other cities. In 1976, he began to work and live in Berlin, thanks to the DAAD scholarship (Deutscher Akademischer Austauschdienst). He participated in many competitions for monuments and sculptures in the public space. His most famous monument is the one for the deported Jews of Berlin, which is located at the Grunewald station. Life-size human figures in different groups or surroundings are the basic theme of his art.

A doctor of humanities in Art Studies, a master of arts, a lecturer and a curator of exhibitions like: Stanisław Horno-Popławski (1902–1997). The Road of Art - the Art of the Road, Dido's State which presented contemporary Polish sculpture (State Art Gallery in Sopot 2010, Gallery of New Media in Warsaw), Krzysztof Malec - sculpture, documentation of the work (State Art Gallery and Centre of Polish Sculpture in Orońsko 2003-2004), Magdalena Abakanowicz: Potnia Theron (State Art Gallery 2012), …apocrypha, imponderabilia – Alina Szapocznikow, Snowdrops (both at the Sate Art Gallery in Sopot and the Opera Gallery at the National Opera of the Grand Theatre in Warsaw 2013–2014), the exhibition of Ktarzyna Józefowicz and Piotr Józefowicz Annexing another part of individual time (2013–2014) and Jerzy Bereś – Zbigniew Warpechowski. Ablutions (both at the State Art Gallery in Sopot, 2014). A member of the Polish Institute of World Art Studies.