Explore the world with Tomasz Grzywaczewski 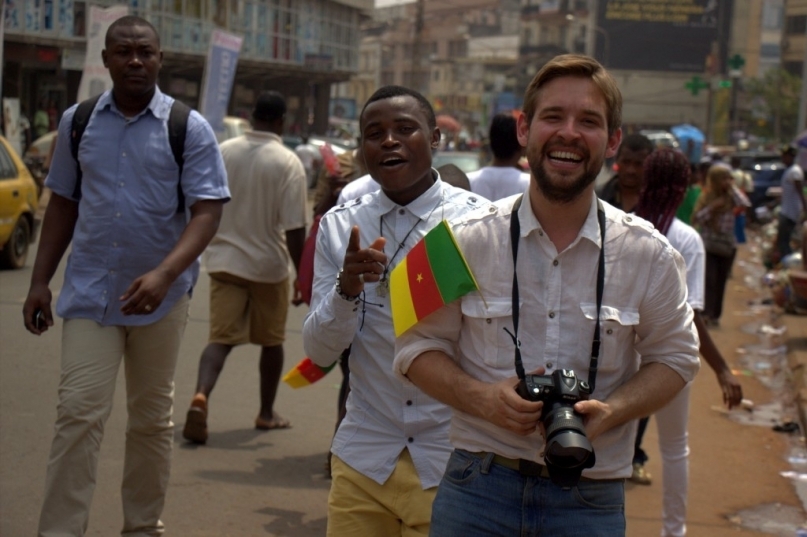 From Siberia to India along the route of the Poles who escaped from Gulag or along a Syberian phantom railway - Tomasz Grzywaczewski, a journalist, is known for unique travel ideas. On 15th June, at 5:30 PM, the traveller will talk about his expedition, which followed the path of Stefan Szolc-Rogoziński, a 19th century Polish Africa explorer.

The story of Szolc-Rogoziński's short, 35 year, life is a material for a fascinating book. The zealous young man who dreamt about long trips since he was a child. He managed to achieve his goal, against all odds. In 1882, when he was less than 21 years old, he set off to the unknown areas of Equatorial Africa. He was supported by eminent figures, like Bolesław Prus or Henryk Sienkiewicz. During his almost two year long expedition, he explored a large part of Cameroon. He drew perfect maps and gave polish names to the areas he discovered. He also sent chests full of ethnographic treasures to a museum in Warsaw. He was just one step from establishing a Polish colony in Africa. The plans were baffled by great politics as well as a tragic, premature death.

Tomasz Grzywaczewski set off to follow his footsteps over one hundred years later. In January 2016, he took part in the Expédition Africaine Rogoziński Vivat Polonia 2016 expedition to Cameroon, Nigeria, Liberia and Ivory Coast.

The expedition was awarded a flag of the prestigious Explorers Club, which is given to the most interesting travel and exploring enterprises of the whole world.

Tomasz Grzywaczewski - the youngest Polish member of the American explorers' club - will talk about his fascination with the character and personality of Rogoziński, who was able to explore Cameroon in a peaceful way. He will also share his experience of exploring the world based on 19th century maps.

A journalist, explorer and doctoral student of international law, who specialises in the problems of quasi-states. The youngest Polish member of the prestigious American Explorers Club. The author of many travel and journalist enterprises, like Long Walk Plus Expedition, which followed the route of the Poles who escaped Gulag and Dead Road 1953–2013, a trip along the Transpolar Mainline, which was also called the Dead Road. As a journalist, he worked for Wprost and Dziennik Gazeta Prawna. He also published in National Geographic Traveller and Reader's Digest. He regularly writes for Podróże. He is the author of the book Across the Wild East, which received the Magellan award for the best travel reportage of 2012 and Life and Death on the Dead Road, which was published in autumn 2015. He hates routine. He feels the happiest when he is on the road and each day brings a new adventure or challenge. According to the words of Robert Frost, when he has a choice between two roads, he always chooses the one less travelled by.

Explore the world with...

The Museum hosts meetings with unique personalities who have visited places connected with Polish emigration during their expeditions. We can listen to their stories about extreme aspects of exotic trips as well as Polish traces and situations connected with our natives, which the guests have encountered in the most remote corners of the world.

The meeting can be interpreted into the Polish Sing Language. This service is free of charge. If you need it, please contact the Education Department of the Emigration Museum in Gdynia via telephone(58 670 41 60, 58 670 41 89) or email: a.posluszna@muzeumemigracji.pl

Explore the world with Tomasz Grzywaczewski