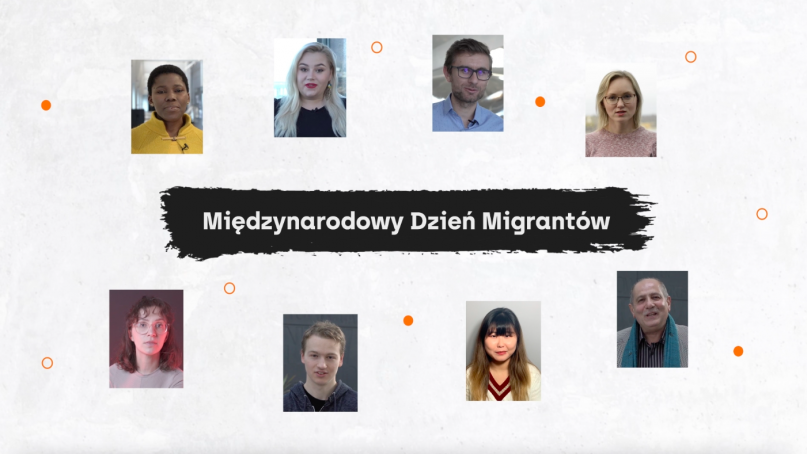 Why do people migrate? Who is an internal migrant and who is an external migrant? How many foreigners currently live in Poland? We encourage you to watch a special film prepared in co-operation with people with migrational experience. The material has been prepared for the International Migrants Day celebrated each year on 18 December. It is a holiday established with a view to observe the human rights and increase the awareness of legal safeguarding of the employees' rights.

This day provides an occasion to talk about tolerance, diversity, co-creating intercultural society. To think about the scale of migration, the great number of people it concerns and the reasons behind their decision to migrate.

The Emigration Museum in Gdynia presents the story of millions of Poles who decided to leave their country. While talking about the fate of Poles around the world, we do not forget about our closest surroundings - people who have moved to Poland or Tri-City from other states, towns or villages. These are the stories we want to share with you on this important day.

We would also like to encourage you to read the article on migration prepared by Kinga Langowska - research officer of the Emigration Museum in Gdynia.

Learn the most important details about migrations in the modern world

The International Migrants Day is celebrated every year on 18 December. It was established in 2000 by the United Nations General Assembly upon a proposal from the United Nations Economic and Social Council. This particular date was chosen to symbolise the adoption of the International Convention on the Protection of the Rights of All Migrant Workers and Members of Their Families, which had been signed on 18 December 1990. In their reasons for the decision, the United Nations General Assembly stressed the need to make further efforts in order to ensure the observance of human rights and basic freedoms of all migrants.

Migrants account for a part of the population in every country all over the world. According to the WORLD MIGRATION REPORT 2020 published in 2019 by the International Organization for Migration, over 272 million people (accounting for 3.5 per cent of the global population) live outside their country of origin. This number is constantly growing. Of this 272 million, 2/3 are economic migrants.

There are slightly more men amongst migrants - 52 per cent. As many as 74 per cent of migrants are working-age people (aged 20-64). The greatest number of migrants come from India. Data show that in 2019 as many as 17.5 million Indian citizens lived outside of India. It is followed by Mexico (11.8 million people) and China (10.7 million people). The United States remain main migration destination for people from around the globe.

International migration is a diversified phenomenon, directly connected with the dynamically changing economic, demographic or environmental conditions on a given territory. Economic migration routes have been established within the last couple of years from the developing to the highly developed countries, such as the United States, France, Great Britain, Russia, the United Arab Emirates and Saudi Arabia.

The last two years abounded in events which had a significant impact on the internal and external movements of people in various parts of the world. These were, first and foremost, armed conflicts. Due to them, people were leaving the Syrian Arab Republic, the Republic of Yemen, the Central African Republic, the Democratic Republic of the Congo and South Sudan. In 2019, the number of internal migrants who had been forced to leave their place of permanent residence due to violence and conflicts reached 41.3 million. It has been the highest number since 1998, when the Internal Displacement Monitoring Centre started the monitoring. The greatest number of internal migrants was recorded in the Syrian Arab Republic (6.1 million), Colombia (5.8 million) and the Democratic Republic of the Congo (3.1 million).

We need to mention here also the migration crisis in Venezuela. The activities of the authorities led to an economic and political crisis there, forcing significant number of citizens to migrate. Experts believe it is one of the greatest waves of migration in the history of South America. It is estimated that 4.5 million people left Venezuela as a result of severe poverty.

Global experts draw attention to the increasing influence of environmental and climate change on the global migration trends, including planned migrations, relocations and displacements. Particular climate threats happened in 2018-2019 in such countries as Mozambique, the Philippines, China, India and the United States. In March 2019, torrential rains and winds brought by cyclones Idai and Kenneth destroyed homes of thousands of people in Africa. Cyclone Idai, which hit Mozambique, is believed to have been one of the greatest natural disasters in the history of Southern Africa. Within just one month, the cyclone caused the death of 600 people and led to the displacement of 130,000 Mozambican people. According to the forecasts prepared by experts, the rising water levels, increasingly frequent droughts, hurricanes or prolonging of the wet season will have greater and greater impact on global migration movements.

International Network of Migration Museums Calls For Solidarity with Refugees